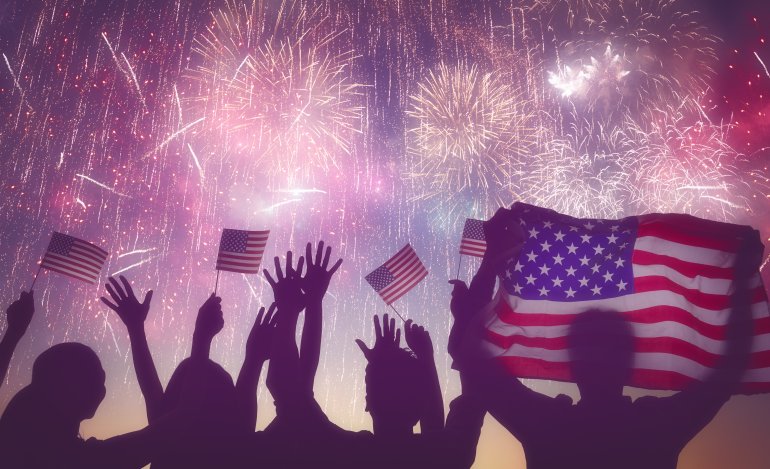 Since I was about 25 years old, the 5th of July has always sucked….big time. Especially those “middle of the week” 4th of July celebrations. Fuuuuuuuck that shit!

Every year on the 5th of July I was usually putting the pieces back together from whatever happened on the 4th of July. I would party soooooo hard that the 5th of July would be a day I’d either be dying in bed, still throwing up from the night before or shamefully apologizing to people I upset or embarrassed myself in front of (or maybe even all three).

And ooooooo the pictures. Like the one below that are fucking hilarious, don’t get me wrong. I have zero recollection of taking this photo but I’m pretty sure I’m trying to eat that hanging star in front of me. Sooooo dumb lol.

Sometimes I’d wake up on the 5th and go straight back to drinking – mimosas anyone? Sometimes I’d check my phone and see a bunch of” thank you’s for having me” from people I don’t even remember coming to my parties. Other times I had passed out drunk before most people even got there and spent the entire party puking and sleeping in my bedroom while everyone else had a good time.

I was known for being the girl who couldn’t even make it to noon on the 4th of July. Sure, it was funny to make jokes about it at the time. Will Nicole make it past noon this year? Let’s take bets. Probably not! Sometimes I did, but sometimes I didn’t.

I don’t blame anyone for laughing or making jokes about it, trust me! I thought it was funny too. Even I didn’t understand the internal battle I was dealing with when it came to alcohol, especially during those times where everything else in my life was going great. I had an awesome boyfriend, great job, amazing friends and I lived steps from the sand. I didn’t drink ALL the time. I rarely drank when I was sad and I only blacked out every now and then after a heavy drinking day like the 4th of July.

Yesterday, Facebook reminded me of the many drunken 4th of July celebrations. Lots of pictures where I look wasted af, many of them I don’t remember taking. Last year’s photos are the most telling though. This is a photo of me, sitting in my bedroom dressed in american attire, drinking alone. Looks kind of innocent but it definitely wasn’t. I ordered several bottles of wine via door dash and got annihilated BY MYSELF! I think I had plans to be somewhere, but drank too much and canceled them to stay home.

I remember standing barefoot at one point outside watching my neighbors set off fireworks in the street then I woke up in my bed on the 5th of July, hungover af and had to roll my ass out of bed and go to work. I probably drank whatever was left of the bottle next to me – hair of the dog, ya know.

The 5th of July was usually a dark day for me. Maybe I vowed never to drink again or maybe I just wrote off the behavior as “come on, I was celebrating America”.

However, this 5th of July I’m waking up bright eyed and bushy tailed in beautiful Barcelona. I remember everything that happened last night and I’m not hungover and dreading life. This year is different and I’m grateful for it.

We found a local pub that was celebrating the 4th of July last night and it was spectacular. People were dressed in American attire, waving flags, dancing and drinking. It felt like home.

We ate chicken wings with RANCH!!! Yes ranch!!!! I haven’t had ranch in almost 3 months, it’s just not a thing in Europe but we drown everything in Ranch in America lol.

But best of all, I got to spend 4th of July sober and with people I love. I didn’t get to drink and it was tough to watch everyone else around me getting tipsy and enjoying themselves. But ya know, it wasn’t all that bad being the sober one. Especially as I watched a guy, black out drunk, puking all over the bar on his way out the door.

I don’t miss those days. I’m grateful to be in recovery and while I realize I probably sound like a broken record about this shit, it helps me to talk it out. I struggled yesterday and reached out to people to tell them about how I still had a sense of guilt about previous 4th of Julys and it brought up a lot of regret and bad feelings, but I didn’t drink them away. I allowed myself to feel them and deal with them.

I don’t hate the 5th of July anymore. It’s just another day in another week in another year.

I hope everyone had an awesome and safe 4th of July!!!