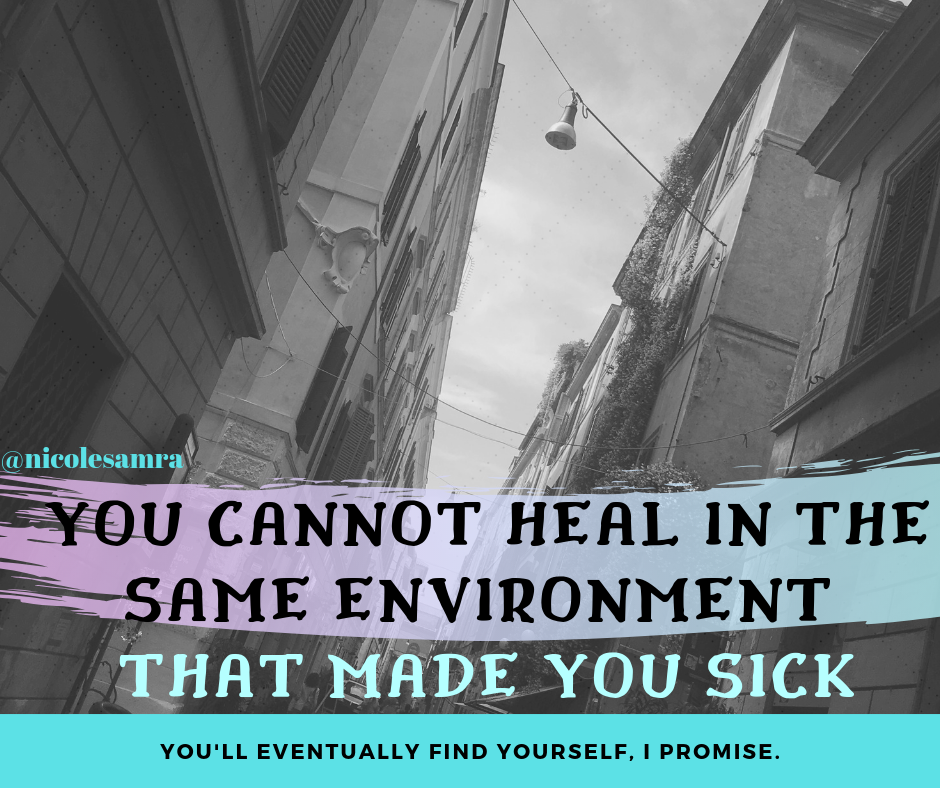 I saw this quote recently and it spoke to me super hard. I stopped dead in my tracks and I was like THIS IS IT!!!! THIS IS EVERYTHING!!!

You Cannot Heal in the Same Environment That Made You Sick

Some Profound Fucking Thinker Whoever They Are

I realize that not everyone can completely uproot themselves from their current situations but damnit if you can, do it!

Before I left for this trip, I had been stuck in a rut for nearly 2 years where everything around me was falling THE FUCK apart. I was so mentally ill and suffering from my alcoholism that I was making poor choices left and right.

What’s interesting is I’ve been doing versions of this my whole life. This trip was more of an extreme, but still a necessary one.

I left a toxic marriage. Literally woke up one day and got the fuck out of there. I completely left everything behind – the house we bought, the furniture, the valuable belongings….everything!

I’ve also left toxic jobs that felt soul sucking and completely un-rewarding and/or under-paying. There was a particular job I had with a boss who was relentless and I did an amazing job for his company. One Friday I just packed my desk when I got ready to leave for the day and I never went back.

I’ve relocated several times in my life as well. Sometimes I’ve just needed a change of scenery. I left Orange County for Los Angeles a few years ago. I came out to LA to find myself and pursue acting in a real way. It was a complete removal from what I knew to a brand new life – I had never lived on my own before and had never actually hit the dating scene.

I’ve left toxic living environments too. I lived with 30 people when I moved to LA and near the end, the landlord turned out to be a total psycho, almost murdering one of his tenants and running from the law. Shit got real very quickly.

So it makes sense that this pattern would continue for me. Sometimes I have to remove myself completely from a toxic situation in order to see the real picture of what’s going on, to learn from it, to heal and then move on.

Some might see this as running away (and I understand why) but I think it’s quite the opposite. I haven’t been ignoring my issues. I couldn’t even if I wanted to. I’ve been forced to proactively work on the things that crushed my soul back home.

I can’t escape alcoholism – people literally drink everywhere, maybe even more so here in Europe. My sobriety has been tested on numerous occasions outside of even my own daily struggle. It will forever be a part of me.

I can’t escape my co-dependency issues. They are alive in present no matter where I go. What I can see now more clearly is how much I’ve let my codependency affect my decision making abilities with family, friends and relationships. Stepping away has allowed me to see my own mistakes more clearly and help me figure out what I actually want versus what others have projected onto me as it pertains to their own needs.

I can’t escape my financial issues. My debt follows me and when I get home I have a lot of money to spend on finding a place to live, furniture, etc. I’ve worked this whole trip and I’ve still had to pay my bills and all that shit too.

But there were some things I COULD remove myself from geographically…

I could remove myself from my bad habits. Case and point, I was eating fast food garbage every single day of my life. I wasn’t exercising or getting out of the house very much at all. I was stuck in habitual patterns that were leading to self destructive tendencies and over-thinking everything.

I was forced to be single. I didn’t have a partner to fall back on and I was the “third wheel” a shit ton! I used to loathe being the “single one” or laying alone in bed at night. I’m actually quite good on my own.

I’ve had multiple partners for so long now that I forgot how to just be on my own. I didn’t even realize how much that weighed on me until I’ve taken time away from it all. I forgot that I’ve never really needed another person to feel complete or whole. That being in a relationship is a want, not a need. It was good to be reminded of that.

I was becoming my own worst enemy at home and the only way to get out of it was to throw myself into the unknown again. Sink or swim. Let this Europe trip be a complete reset like I had done before.

I’m not saying that I am fixed or that I might not fall back into some of those old habits (they die hard, as the saying goes), but I feel that my mental health has been restored while here. I’ve been able to heal some of the hurts I suffered before I left. Overall I’ve been able to take a freaking break for a second, take a breathe and just simply exist outside of anyone else’s wants/expectations/needs but my own.

I just had to deal with my shit, whether I wanted to or not. Sure, there have been a few bumps along the way, but overall, I feel better and stronger then I have in a very long time.

It’s true, I don’t think I would’ve healed staying in the same environment I got sick in. I was a broken hearted, floundering alcoholic with no clear direction clinging on to anything around me that would help me stay afloat for just a little bit longer while I got my shit together.

Baby was under the sea but she’s grown legs and is ready to walk out of the deep dark ocean and into that beautiful sunlight again.

My goal when I return is to continue pushing myself and getting outside of my comfort zone. Being in Europe, in places I don’t know anyone, I’ve been able to make new connections. I’ve been able to navigate and thrive in unfamiliar territory. I’ve opened up to complete strangers, I’ve found love, I’ve found friendship, I’ve found beauty….but best of all, I’ve found my way back to some form of sanity again.

I left Los Angeles a pretty broken down woman but I’m returning in a new and evolving form. I’ll probably make mistakes and fuck up, but I finally feel ready to at least try again and that’s all I can really ask for in this world.