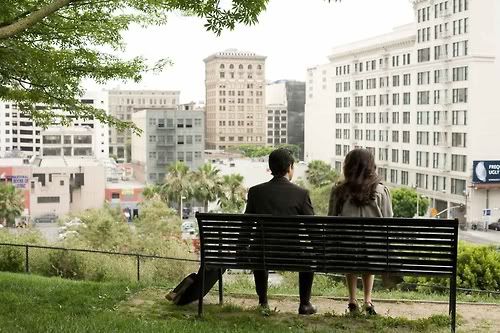 Have a listen to this scene before reading this post. Let the words sink in for a moment. How does that feel? Have you been on the receiving end of this type of conversation? Have you been the deliverer? Maybe you’ve been both.

When I saw this scene in movie theaters back in 2009 I remember thinking how tragic. The poor schmuck! I could never do this to someone. I would never allow someone to do this to me….all the while I was sitting in an abusive relationship with someone doing much worse to me every single day. Perspective.

I hated the movie then. Why? Because it didn’t seem real to me then. Now is a whole different story…

I listened to a song from this soundtrack yesterday and it reminded me of this movie and a scene called Expectation vs. Reality. In the scene, Tom goes to Summer’s party with the expectation and that they will get back together. You see, they broke up and he was still madly in love with her. She was “the one” in his mind. The type of love that he believed would make him complete – that he couldn’t be happen in this world without her. Romantic but also sad. As the scene unfolds, we learn that expectation does not meet reality at all.

Here is the scene…

The lyrics of the song in this scene sum it up perfectly – “He never ever saw it coming at all….It’s all right. No one’s got it all.”

I’ve always loved this scene because it’s so indicative of real life, isn’t it? We go into certain situations with this idea of what might happen. When it doesn’t, boy is it a letdown. Sometimes reality meets expectations and it’s great…but SPOILER ALERT! this is not a happy ending for these two characters I’m sorry to say.

I’ve gone into an evening with a whole set of expectations and not a single one panned out then go home and beat yourself up over it. How could I have been such a fool? Woe is me?! Epic pity party style stuff right there. But back to the topic at hand….

You Were Just Wrong About Me

The scene at the top of this post occurs AFTER the Expectation vs Reality engagement revelation. It’s that final closure type of conversation. Tom can’t understand how she can go from “you never wanted to be somebody’s girlfriend” to “now you’re someone’s wife”.

Her answer: “It surprised me too! It just happened.”

Tom starts to unravel all of his ideas of what true love is, destiny, fate…it all starts to feel like lies.

Then she hits him with: “I just woke up one day and I knew what I was never sure of with you.”

There it is. The ugly truth. The truth I’ve had said to me by partners and the truth I’ve said to partners as well. Essentially: You were not “the one”. We are not meant to be together. The reasons why have varied from relationship to relationship but the truth was – they weren’t it or I wasn’t it for them.

That’s a big ol bowl of ouch served with a side of heartbreak and devastation. But the truth it, once you’ve had some time away from the seemingly devastating tragedy – you begin to realize it too. You realize it even more when you finally meet and fall in love with someone who IS actually “the one” for you.

The hopeful bit here though is at the end of this scene, where she points out that destiny and soulmates and true love do still exist, he was just wrong about those things being her.

I’ve certainly been wrong about my fair share of people I’ve been involved with and some have been wrong about me too. However, I’m still grateful for each of them because I believe they’ve helped me figure out things about myself and offer guidance on what makes someone “the one” for me.

I felt compelled to write about this one today. Maybe it’s because someone I know is struggling or going through heartbreak and needs to hear it. Or maybe it’s because it’s just a good reminder that sometimes we are just wrong about the people we love.

I believe “the one” is someone who believes that you are also “the one”. It’s as simple as that. You want someone who believes to their core that they want to be with you till the end of time and wants to work on that relationship every day even when things get tough. THAT is the relationship worth fighting for and staying in and losing yourself in. The one that makes you get out of bed each morning and do a flashmob style movie dance sequence to “You Make My Dreams Come True”.

Ok, maybe I stole that last part from the movie….but you get the idea.