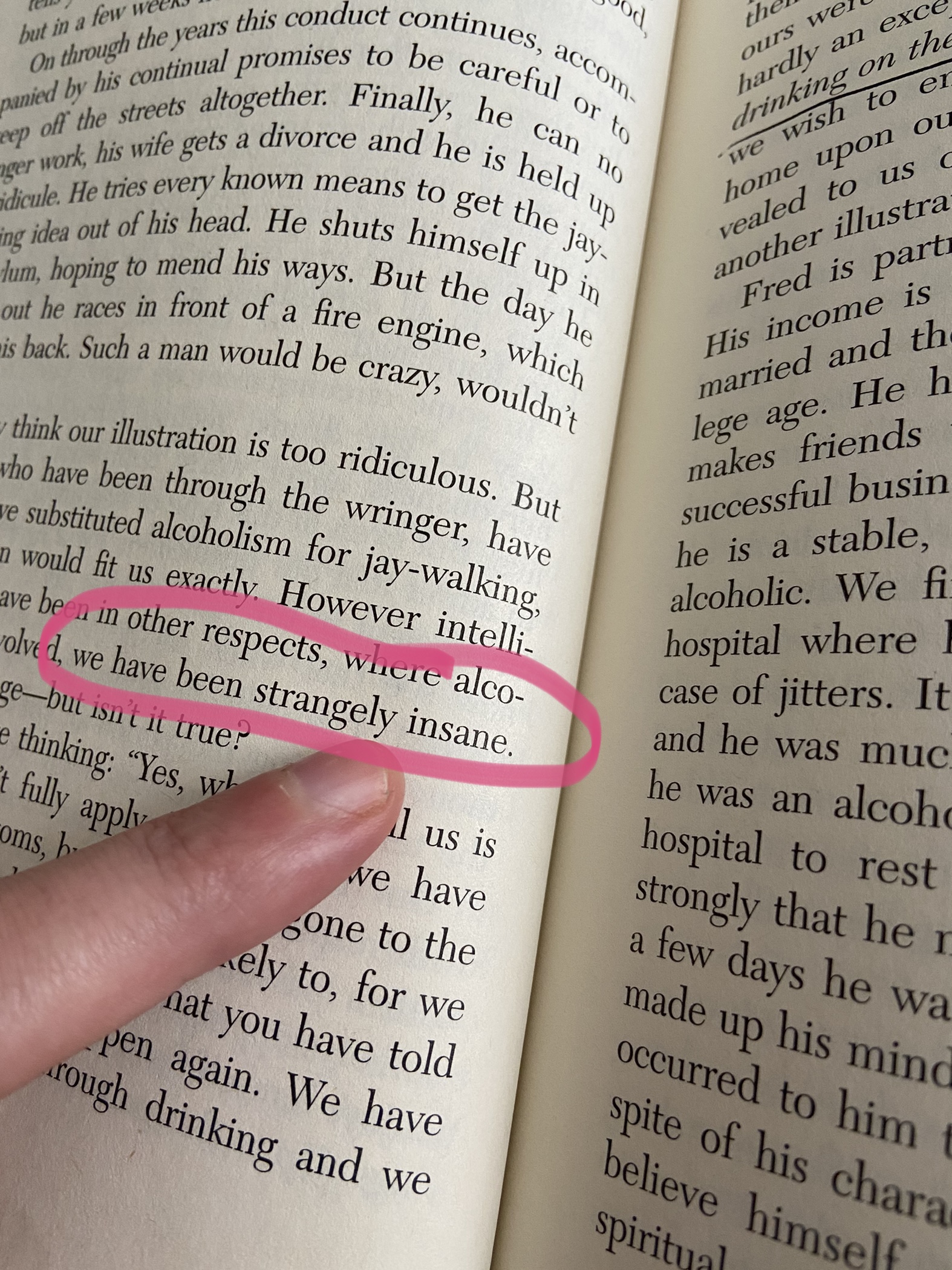 I was reading last night with my sponsor and this grouping of words caught my attention: Strangely Insane. It was being used to describe alcoholics that they seem strangely insane.

I have definitely felt strangely insane. Let me explain.

Nearly 2 years ago, I knew that I had a drinking problem. I knew that if I had one drink, it wasn’t going to stop there. I was aware of the ramifications of my actions, that something bad would likely happen as a result of having that one first drink. If not this time, certainly next time. I had proof of that. Time and time again I had seen the damage and fallout from times I drank. It didn’t stop me.

So many times I went out drinking and ended up in some of the worst situations of my life. Yet, I picked up the drink again. I told myself that it wouldn’t happen again. Then it would happen again. I would tell myself that this time, things would be different. They weren’t. Maybe I would go a few times without an incident, but then a night would come where things would get bad…really bad.

I was very fully aware of the issue. I even understood fully that I could not control it. But my ego was so convinced that I could overcome it that I would keep going the same thing over and over expecting that one day I’d prove myself right – that I COULD DO THIS MYSELF. That I wasn’t an alcoholic. I’d try to find validation anywhere that I wasn’t like “them”.

I was causing damage in my relationships. People were calling me out about my drinking problem. Others were telling me I was fine. I’ll give you one guess which people I spent more time with. I found comfort in the enablers and found resistance in the people who were telling me the truth because they loved me. The ones who wanted to help, I pushed away. The ones who wanted to be my drinking buddies, I drew closer to me.

It was strangely insane, this type of thinking and behavior. It was detrimental to my health. No matter how much evidence I had stacking up against me, I just kept on doing what I was doing.

Looking back on it now, I see how absurdly strange and insane that type of thinking is. It’s also the same type of thinking that many people with my affliction go through. In reading that last night, I sat with that feeling for a bit. To normies (people who are normal drinkers and not alcoholics), they can’t understand this. To them, we seem insane (strangely and often times frightfully when we hit bottom).

But to other alcoholics though, this type of thinking bonds us. We get it. We understand that the insanity is what causes us to repeatedly drink too much, to make excuses, to think we can overcome it, to think that we are a lost cause.

The book goes on to talk about how doctor’s, of the time, didn’t want to treat alcoholics because, truthfully, they were heartbreaking to watch. No matter what the doctor’s did medically, the alcoholic would go back to the drink. They couldn’t find a solution. They couldn’t keep them well.

That IS heartbreaking, isn’t it? I’ve experienced this heartbreak myself with other addicts. No matter what you do to try and help them, sometimes they still go back to drinking and using. I imagine those around me felt the same many times when I vowed to do better, but then hit rock bottom again.

Fortunately I’ve been able to keep the monkey off my back for 22 months. It’s less about “not drinking” these days and more about fighting my disease that has permeated other parts of my life.

I felt strangely insane recently. I didn’t want to drink but I did want to run away, to not feel what I was feeling. I think that’s the fight or flight instinct we all have kicking in. Now, I just don’t turn to numbing myself out and I have to eventually face the insanity head on because the running only lasts until I’m too tired to do it anymore.

It’s likely that I’ll fight this strange insanity for the rest of my life but I’m okay with that. It’s better than the alternative – suffering from the ramifications of giving into it.