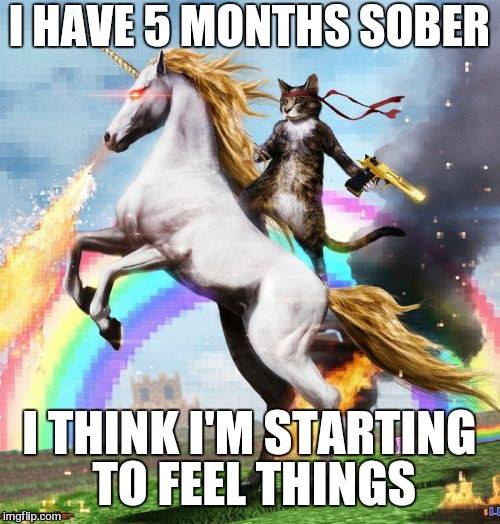 That’s right, I hated sober people. Hate is such a strong word but it was definitely a mixture of distain and probably even jealousy every time I met someone who said, “I’m Sober”.

How could going to some meetings and talking about God stuff really help anyone. I loathed the idea of the whole AA program. Sitting in dimly lit rooms in a fucking circle talking about sad stories that make you want to slit your wrists by the end of the meeting. While Bob gets up and gets his 10th cup of really shitty coffee with powdered creamer as Suzie tells her “last night drinking” story for the hundredth time and a handful of people scroll through their phones just waiting to get their court papers signed.

The whole idea of the AA program seemed like a complete joke to me and a waste of time. But whatever, if it made these “sober” people happy and stopped them from being assholes, then cool.

When people would tell me they were sober I would roll my eyes. I was never the person who would say, “Oh that’s so great” or “Congratulations” or “I’m so happy for you”. No, I would secretly think to myself….what a bonehead! What kind of a person has a drinking problem anyway? I bet they think they are better than me now, don’t they?

I had always thought of alcoholics as the very extreme cases you’d see in movies and tv shows. They beat their spouses and children, wear dirty alcohol stained t-shirts everywhere they go and always drink out of bottles wrapped with paper bags. Their life is always completely crumbling around them and yet they still pick up a bottle or a needle and get their fix. Selfish fucking assholes is what they are, right? What kind of a person can’t stop drinking? Someone who is a total piece of shit, that’s who.

I always understood junkies, people who used hardcore drugs. That shit is mind altering and highly addictive. But alcohol, I never thought of it as something someone could be addicted to chemically or even genetically. I always saw drinking as a choice and thus a character flaw when someone had a problem with it. Probably why it took me so long to realize mine.

I Was a Judgemental Savage

Damn was I judgmental about people I knew nothing about. But was it really ME being judgmental or was it that I saw myself in their struggle, unwilling to admit that I had a problem and unwilling to do anything about it? I think both.

I’ve known a lot of sober people and I always assumed they were like these rockstar party level humans who had a very blurry past but were not able to hold themselves together long enough to make it from meeting to meeting without fucking up their lives over and over again.

I’ve dated sober people. The sober people I’ve dated I always secretly wondered how bad things got for them, but was always too afraid to ever ask. Partly because I didn’t want to know the truth and partly because I knew they’d be talking about someone I could identify with.

Fuuuuuuuuuuuck. Even as I type that out I can feel the truth behind the words. I hated sober people because I believed they were superior to me, they were getting help and I was still stuck back in my old ways stubborn and drowning.

Sober People Have Always Been Good To Me

The truth it, even though I felt this way about them, completely misunderstood the AA program and thought these humans were flawed individuals – I’ve never once had a sober person be a dick to me when I didn’t say congratulations or expressed any type of resentment about the program or alcoholics in general. They were just understanding and….kind.

I never had a sober person point out my very obvious drinking problem. I’m grateful they didn’t because I’m 100% certain I wouldn’t have received it well. They always just listened when I talked and never really judged me or tried to push me into the program.

There was always a certain level of acceptance amongst my sober friends and partners. Probably because they had already been down the road I was currently on and knew it was going to have to be my decision and my decision alone to get better.

Sober People Helped Me Despite My Bullshit Way of Thinking

It was those same Sober people I turned to the morning after my last night drinking. They didn’t judge me, they opened their arms and said come on home. They understood the deep dark place I was in, more than any one else I turned to that day in my desperation.

Frankly, my views about sober people, sobriety and the AA program were complete and utter bullshit. They came from a place of jealousy and required a level of self-realization that I was not prepared to handle in my addicted state. People are often afraid of what they don’t understand and I believe that played a role in my negative outlook on it all.

But mostly, I just didn’t want to change back then. I wanted to keep drinking and solve the problem myself. I didn’t want to admit that there was anything wrong with me. Seeing and being around sober people made me feel “less than” and “out of control” and brought out all the insecurities I had about my own issues.

But today, I am so grateful for each and every sober person who came into my life. You mattered, even if I never told you. Your presence alone mattered. You planted seeds that would eventually blossom into the sobriety I am now enjoying today.

I no longer hate sober people. I am one of them.