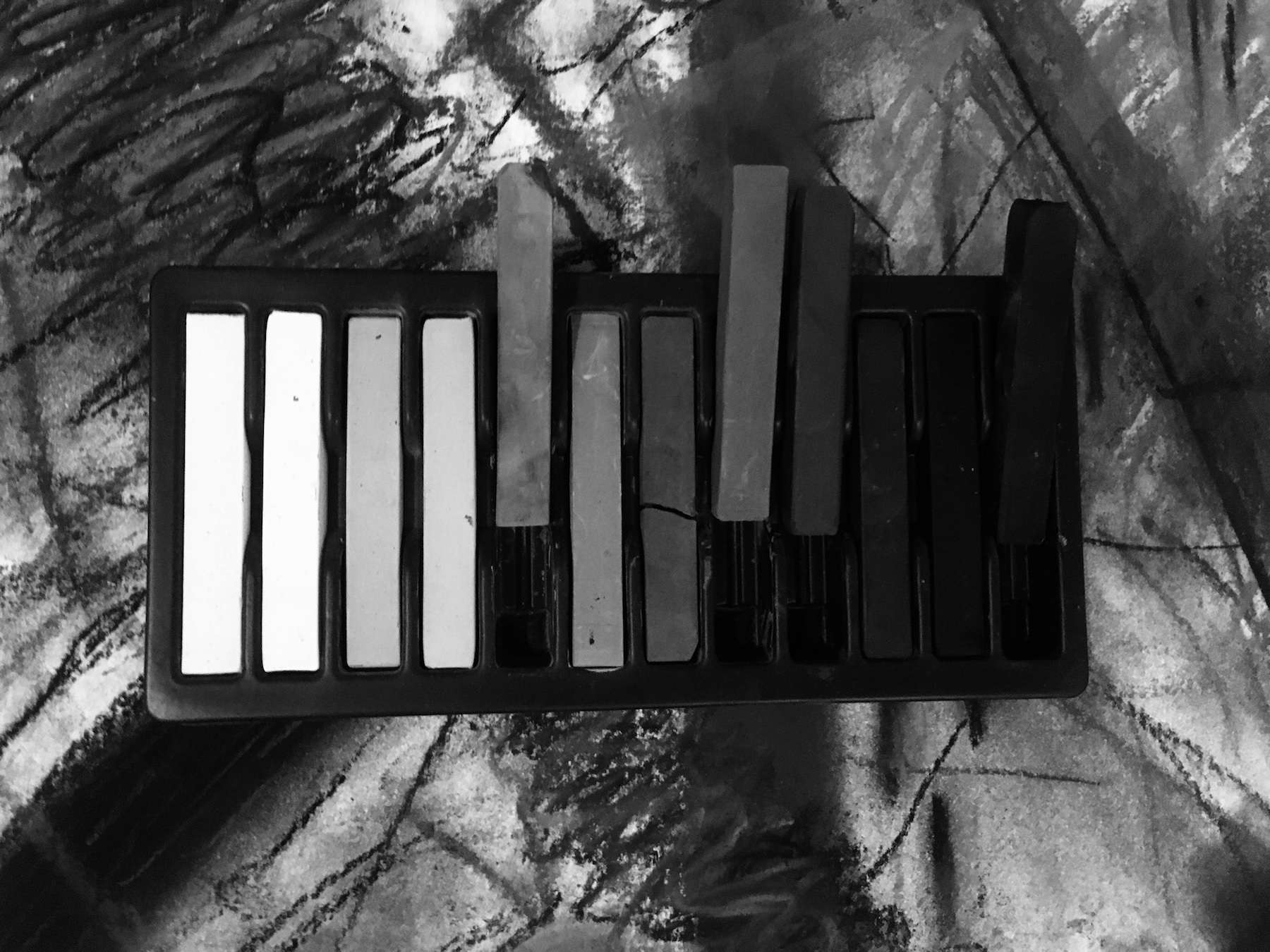 June 22, 2019 by Nicole
The picture above is of a piece of art I created after waking up from a vivid dream I had about my recovery and alcohol. I went out that day in Rome and found art supplies. I’ve never once created a piece of art using pastels or really much physical art at all. I wasn’t really sure why I needed to create this piece but I did. Last night I realized what I was creating. I was recreating what it is like in my brain after a blackout.
It occurred to me after talking with a few friends about it over tapas here in Barcelona. They asked me why I gave up drinking and I told some stories but I couldn’t possibly paint the entire picture. I realized it was years upon years of struggles that got me to my final night drinking.
I was in denial for 5 whole years that alcohol was even a problem in my life. It was a loooooong drawn out process. It didn’t happen all at once, it was gradual and slow.

It was such a gradual process that I had even myself fooled for a long time. I can trace my drinking problems back to the times I started drinking to “forget”, “not to feel”, “to just check out”, “for fun”, “to turn my brain off”, etc.

I say gradual because the drinking didn’t really fuck up my life right away at all. I still had full-time employment, a roof over my head and success in many areas of my life. Sure, I upset some people and got myself into some curious situations but I chalked it up to just a random night of drinking a little too much. There was always a reason or an excuse to justify why I got too drunk or why I fucked up that night. But it’s cool cuz people always forgave me and eventually I’d forget about the incident entirely.

Blacking out became my worst enemy and also my best friend. There are huge chunks of time in the last 5 years where I have no idea where I was or what I was doing FOR HOURS. Yea, I would play it off as funny and recount some of the silly things I did that people had pictures of that I didn’t remember doing…but inside, it wasn’t really that funny, it was scary.

There was a particular incident a few years ago that I’ll share that started planting the seeds of alcoholism in my mind and freaking me out but still took another 5 years to do something.

It started simple. A couple drinks at happy hour with some friends that led to me going back to their apartment. More drinks and an introduction to a new substance: cocaine. It’s funny, the first time I ever saw someone use cocaine I was terrified! I left the situation immediately and didn’t even want to hang around the people using it. It freaked me the fuck out.

But this time, I was really drunk and was told it would wake me up so I could keep hanging out. That’s all it took.

I was so intoxicated that I was slurring my words and getting to the point where I was about to black out. So I thought, sure, why not. I don’t want to be the first person passed out in bed….again.

Sometimes during blackouts I’m completely functional and can often fool people into thinking I’m fine. Other times my body would just give up on me and it was clear right away that I couldn’t have anymore alcohol and needed to go home and go to bed (I’m grateful for those times looking back because they saved me from further damage).

In a blackout, I remember absolutely NOTHING. Sometimes I might have a small snippet of a memory but it’s usually unclear and confusing. My brain can’t actually process the information. But typically, I remember nothing even though my body was still in action for hours.

Let me paint the scene for you of what it was like to wake up the next morning:

After this blackout I woke up cold and very confused. As I opened my eyes the sun blinded me. There was an intense pain from my head coupled with what felt like grains of sand beneath my cheek?….fuck, I was laying on the beach. I sat up and all I could see was ocean.

Panic set in. My heart beat fast in my chest and radiated pain through my chest in a very deep dark way. In the way that I’ve felt in the past when having night terrors I can’t wake myself out of. The heart beat actually burns in my chest.

I tried furiously to remember how I got there. What time had I come to the beach? How Long had I been out there? How many people say me just laying here? Did anyone touch me? What was the very last thing I could remember? Fuck why does my head hurt so fucking back. My stomach was in knots. I felt alone.

I looked to the right of me and there was my phone, half buried in the sand. I prayed to god it still had battery life. I wiped it clean and I had missed phone calls, text messages from 5 to 6 different people. Fuck, people were looking for me. How long was I missing?

For a second, my brain went immediately to, you can’t go home. Everyone is going to be so pissed that you disappeared. How was I going to explain this? Maybe I should just run away. Maybe this is the moment I just never come back. Fuck, I don’t want to feel like this! I need water.

I scroll through the text messages and it doesn’t appear that I’ve been gone THAT long. I didn’t sleep out here all night, thank God. As I’m reading the messages my phone rings. It’s a friend and I pick it up. I can hear other people in the background after he says, “she answered”. “Come home Nicole”.

I get up and start walking, trying to figure out if I actually know where I am or not. I’m still a little drunk and it’s hard to walk. I don’t have shoes. I scan the area with my half open eyes and luckily I recognize a lifeguard tower and know that I’m not very far from home.

It felt like the longest walk ever. With each step I felt more sick, both from the huge amount of alcohol I consumed the night before and the impending situation awaiting me. I had no idea why I was on that beach, but I knew deep down it wasn’t something good. Why had I not just gone to bed?

When I got there, I was met with the arms of my mother. MY MOTHER WAS HERE. I was happy to see her but also, much like a child about to be disciplined, I was trembling. How was I going to tell her what happened when I didn’t even know myself. Who had called her? I must’ve really fucked up this time. Would anyone forgive me for whatever it was that I did? Fuck….fuck….FUCK!

My Mom had packed me a bag and put me in her truck. I felt helpless and broken. I spent the rest of the day puking and trying to put the pieces of my life back together.

What had happened that night? Everyone was upset at me, what did I do? I truly had no idea but the guilt of all the possibilities was eating me alive. I wanted to die. I wanted to disappear.

I’ll end the story there because even though apologies were made and things were smoothed over….more things like this were going to happen again and continue happening for me for the next 5 years.

I was already drowning, even then. It was a long time before another incident like this happened again. So I chalked to up to just a very bad drug induced experience that was never going to happen again. I convinced myself it was all fine. I was never going to do cocaine again and THAT was the reason why all this madness happened.

When in reality the trauma from my past marriage was finally catching up to me. I spent nights crying for hours about how he used to treat me and abuse me. Everything bubbling to the surface after stuffing it down for so long. Alcohol was usually the catalyst to unlocking that particular pain.

I remember a specific time where I was sitting on the floor in my kitchen chugging a bottle of vodka screaming about how he used to rape me. As I remember that poor girl in shambles on the kitchen floor, even now, I wish I could’ve helped her but she wasn’t ready.

I was in trouble and I was broken and I needed help. I started going to therapy shortly after that and promising that I would drink less. Notice, I didn’t offer to quit. I kept drinking. I got better for a little while, but it was short lived.

I didn’t know it at the time, but this was going to begin a long pattern in my life. I was going to go through this type of cycle for another 5 years. I would slow my drinking way down, then it would gradually build up again and reach a breaking point. The cycles were going to occur more frequently and the rock bottom was going to keep getting lower and lower each time.

I never gave up the alcohol. It was my crutch, my release, my….addiction. It was my safe place even though it caused so much turmoil in my life. I gave up other things like relationships and friendships that I’ll likely never get back. I gave up jobs/careers. I gave up lots of things, but never the alcohol because it wasn’t the problem….right….

Some of you might be reading this and thinking, my drinking problem isn’t THAT bad. I’ve never done anything like THAT. Jesus Nicole, get your shit together. Or maybe you’re on the other side and thinking damn, it was really bad already then! How could she and other not see it back then?

I always cut back after incidents like this but never gave it up because I couldn’t let it go. I wanted to prove it didn’t have power over me, that I didn’t need it. I’d negotiate with myself and others time and time again.

Some of my most famous negotiations/compromises aka lies to myself and others:

All any of this did was prove time and time again I was an alcoholic. I was wrong about being able to control it. I had a problem.

I haven’t blacked out in 4 months now and it’s fucking glorious. I wake up every morning without a hangover and I know what I did the night before. I don’t negotiate about my alcohol use anymore and I don’t have to lie about it either. Best of all, it doesn’t affect anyone around me any longer (well except maybe my former drinking buddies). I don’t have nights I have to apologize for behaviors & incidents I don’t remember.

I get to just exist, memories in tact and exercise control in that area of my life by taking away alcohol’s power. Look at me! I’m the captain now hahaha.